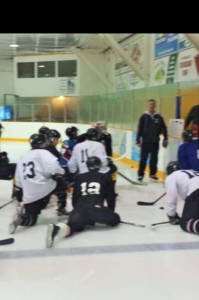 My coaching philosophy is simple — Eat, breathe, and live hockey!

I’ll keep you motivated and teach you the skills to focus on.

For the past 4 seasons I’ve been coaching the Female U18 AAA Eastman Selects. For more details on my coaching history see my coaching resume.

In 2008 at the NCAA Frozen Four National Championship in Boston there were three players from Ste. Anne MB representing three different NCAA teams.  I’m proud to have coached them all from the Squirts age group.

I little bit about my family.  I have eight kids with seven of them playing or had played competitive hockey all reaching various levels.

My oldest son Terry Harrison played in MJHL with Portage Terriers where he earned a full scholarship with the University of Northern Michigan in the NCAA.  He went on to play minor pro hockey in the United States and played professionally in Europe.

Billy Jr. also played for Portage Terriers in the MJHL.

Ryan won the Midget AAA championship in 2000 with Eastman Selects and he also went on to play in the MJHL.

Tyler also played midget AAA and many years in the MJHL.

Brock played for the St Boniface Riels in the MMJHL where they won the championship last season. He also played AAA Midget for the Eastman Selects.

Shelby has followed her sister to Mercyhurst University and both her and Bailey played together for one year.  In the 2013-2014 season Shelby won All Conference in the playoffs in the CCHA in 2013-2014 season.  She has been to two Final Four championship tournaments in NCAA hockey.  She too has played for Team Canada at the U18, U22 and was invited to try out for Team Canada for the 2015 Worlds.  Shelby won the provincials for Bantam girls which I coached. A few of her team mates from that team went on to play at high levels.  Brook Langouis plays for Maine in NCAA Division 1.  Lynn and Karen Larson both play for Wisconsin in NCAA Division 3 and Holly Cortilet and Ricky Krentz went on to play CIS college hockey. In 2015-2016 Shelby played for the Buffalo Beauts of the new Women’s Pro League where she made the all star team. This past year she has chosen to play in Sweden in the Women’s League where all Europe Olympians play.

I truly love teaching the game of hockey. I’m passionate about the development of all players in my camps.